The creative process is used by all … no matter how “creative” one may consider himself. My first introduction to this thought came in the statement, “The secret of creation is held in the name of God.” That was just intriguing enough to capture a moment or so of my attention … and although that attention wavers at times, for the most I’m part getting better at tuning in. 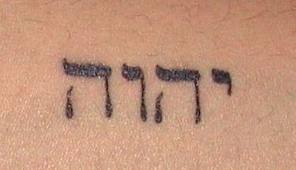 H ~ this second occurrence representing the element of Earth

Y ~ an idea comes to mind, a spark of fire that builds in kind with one’s ability to focus intensely, with singleness of purpose. It is the seed.

H ~ sitting with this idea, it begins to take form in the mind, just as a cup gives form to water poured. It is the womb.

V ~ with form drawn in mind, the Universe unfolds to provide the materials needed, as if wielding a mighty sword, its blade slicing the air on course to drop the mighty oak.

H ~and thus, the Word becomes flesh. As real as this earth you walk upon, it is before you, with you. It is the creation.

With this in mind, consider what you have “consciously” created. As well, consider what you “see” around you … your “creations” … the good, the bad, and the ugly. And then work your way back to the spark of firethat set everything in motion. It could well be a humbling journey back to that moment. It could be humbling to feel heaviness in the energy we focused there. But if it will lead to a better understanding of the creative process and more conscious efforts going forward, it is worth every ounce of energy expended.

The time is now.

I could end right here, but you would likely be left asking how what I’ve shared thus far has anything at all to do with the title I chose, and that would be a fair question. Consider the first two steps of the “process” above. They are both intensely personal. You, your Self, and God. The powers at play here don’t need any “outside” help. They both require focus, funneling energy into the center of the idea at hand. Excitedly sharing epiphanies with others early on will only prove to weaken one’s focus. They don’t need the input of others … and if truth be told, who’s to say that the energy these “others” may bring will be of benefit at all. Perhaps they will think your idea pure folly and come to your bonfire with wet blanket in hand.

Who knows really? But years ago, as I was introduced to some perspectives on this process, I came across the words of a Master saying (in essence), especially during the early stages of creation one must shut up. He insisted that this was detrimental to the process, but yet a common occurrence. Upon further consideration of this thought, it is easy to see how the flow of creativity could be impeded … perverted, by the influx of energies out-of-keeping with the Universal workings. Indeed, there will surely be a point in the process where the assistance of another person(s) may be needed (as in starting a business or other venture), but if so, they will come in due course. The energy of Vav will move with perfect timing … and with one’s focus set firmly on the intent, recognizing moments to move … and in what manner … will be made known.

Needless to say, I was humbled when I considered all of this … because I could not overlook the times I had an idea and wanted to “share” it with others … well before it had opportunity to mature. But I worry not. I simply try to remember from one moment to the next, with a …

As a means of introduction, you are invited to visit here for a moment ... Welcome!

On this path effort never goes to waste, and there is no failure. Even a little effort toward spiritual awareness will protect you from the greatest fear.

Vistas – sites with a view